Written by Bud5adm1n on December 12, 2017. Posted in Uncategorized

The Necessity of Undercoating Your Car – When Should You Do It?

Also known as undersealing, the process of undercoating has been known to offer excellent support for car owners to prevent the underbody or chassis of any vehicle from being damaged by pebbles and debris, with the ultimate result of rust setting in. Although some might consider undercoating to be unnecessary, most experts still support it, and practical use has been found to support the original claims that it actually does help to prevent damage and rust. 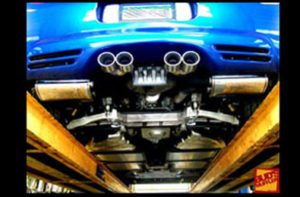 The undercoating process involves bitumen or wax based products that act to protect against anything from mud and dirt to the actual salt used in the salting of certain roads during the winter. Wax-based undercoating is considered to be the most effective, since it doesn’t present the durability-related concerns associated with the original bitumen compounds. According to car and pickup truck owners, undercoating is the first line of defense when dealing with issues such as the trapping of salt solution and the development of rust down the line. According to some drivers, undercoating actually led to some of their cars still being in perfect condition 3-5 years after they were bought, while similar vehicles were already showing clear signs of rust. Even though nothing can replace good maintenance and care, undercoating your car is definitely a good idea, especially if you drive on country roads in an area where the weather isn’t too sunny for most of the year.  I found a great muffler shop near me that recommends undercoating very strongly.  They say the benefits are worth it!